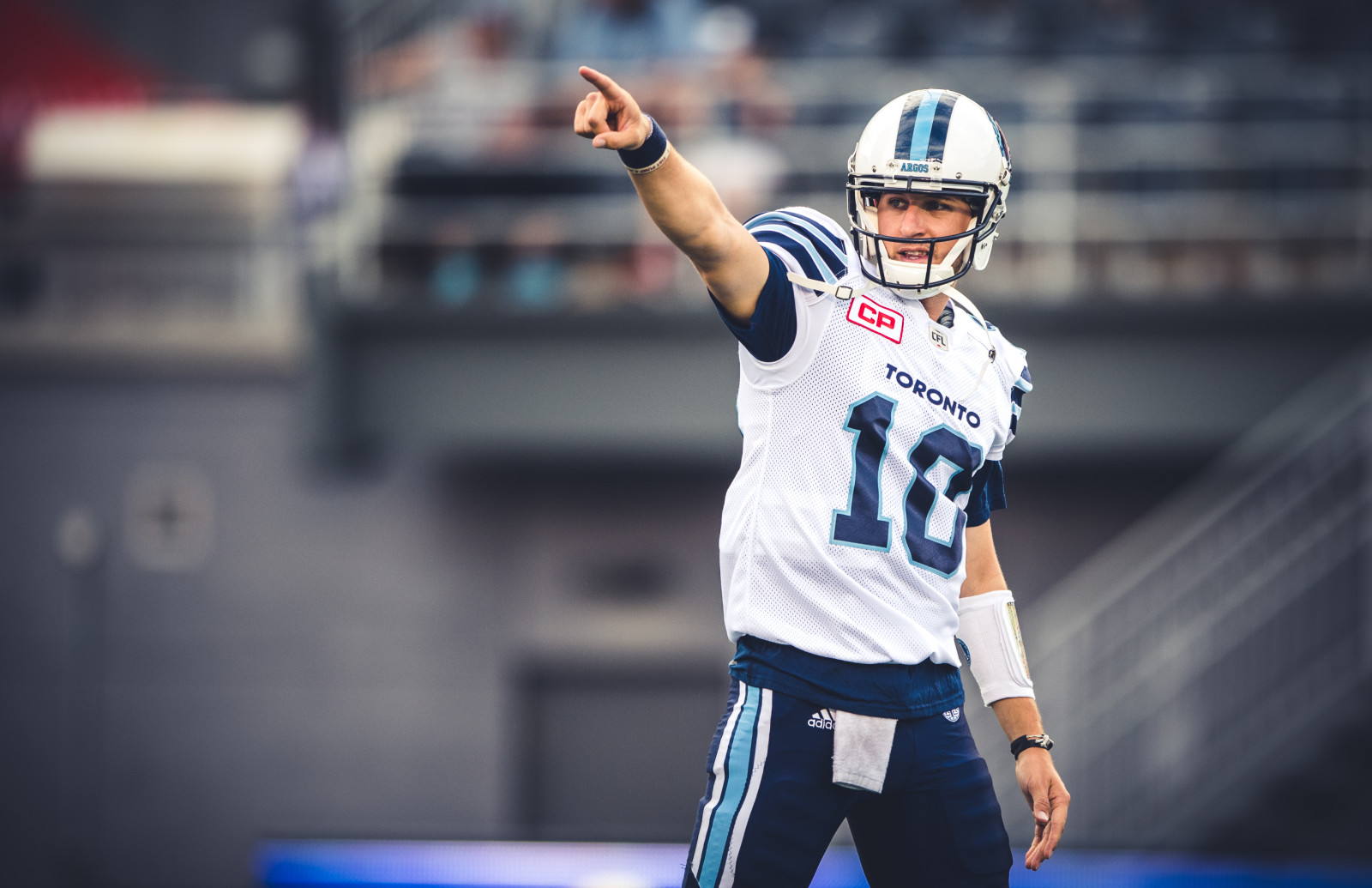 Logan Kilgore (10) of the Toronto Argonauts during the game against the Ottawa REDBLACKS at TD Place stadium in Ottawa, ON. Sunday, July 31, 2016. (Photo: Johany Jutras)

OTTAWA – AJ Jefferson intercepted Henry Burris in the final minute to secure a 23-20 victory for the Toronto Argonauts over the rival Ottawa REDBLACKS.

Making his first career start, Logan Kilgore paced the Boatmen to the win, throwing for 322 yards, a touchdown and two interceptions on 25-of-42 passing. Lirim Hajrullahu kicked five field goals, including a 53 yarder with 1:15 remaining, to secure the win.

Burris was making his return to the REDBLACKS after being out since Week 1. He finished the game completing 20-of-34 passes for 218 yards, a touchdown and a pair of interceptions.

The Jefferson pick, his second of the game, capped a back-and-forth contest where both teams traded the lead in the second half.

Before the game, in a special announcement featuring Prime Minister Justin Trudeau, it was announced that the 105th Grey Cup presented by Shaw will be hosted at TD Place in Ottawa. Members of the 1976 Ottawa Rough Riders team were also honoured pre-kickoff. They were the last Ottawa football team to win the Grey Cup.

It took a few sets from both Burris and Kilgore to find an offensive flow. After the REDBLACKS defence pinned the Argos on their goal line, a punt return by Tristan Jackson put Ottawa at midfield. Brad Sinopoli hauled in a 22-yard pass but the REDBLACKS could not go any further as TJ Heath recorded his second interception in as many weeks, giving the ball back to the Boatmen.

The defences continued to battle, not letting either quarterback move the chains. Brandon Whitaker punched through for successive Argo first downs but Kilgore could not connect with Vidal Hazelton downfield. Toronto had to settle for a single after a 71-yard punt by Hajrullahu for the early 1-0 lead.

Toronto added more points on the board thanks to the leg of Hajrullahu after he connected on a 43-yard field goal attempt to open up the second quarter.

A 12-yard rush by Nic Grigsby opened up a REDBLACKS offensive drive. Burris spread the football around, connecting with Greg Ellingson, Sinopoli and Chris Williams for three first downs to push the team into the red zone. On third-and-goal and five yards away from paydirt, the REDBLACKS appeared to opt for the chip shot field goal. However, Ottawa faked the field goal but Danny O’Brien was picked off in the end zone by Jefferson to end the scoring threat.

Near the closing minute of the first half, a botched snap to REDBLACKS punter Zach Medeiros proved to be no problem as he picked up the football and rushed it for a first down. That inspired the offence as Ernest Jackson brought them 28 yards downfield, leading to a Brock Jensen punch-in touchdown to give Ottawa the 7-4 lead.

The Argos looked to get ahead again before the halftime whistle but Kilgore was intercepted by Mitchell White.

Toronto regained the lead early in the third quarter, sparked by a converted third down pass by Cody Fajardo to Hazelton. That led to a Kenny Shaw touchdown, a 30-yard throw from Kilgore to go ahead 11-7.

The REDBLACKS responded on the next drive as Williams caught a 35-yard pass before Sinopoli brought them 19 yards further downfield. Burris then found Ernest Jackson open for the touchdown as Ottawa was back ahead 14-11.

Kilgore found Hazelton for a 10-yard gain and Anthony Coombs added another fresh set of downs. On the last play of the third quarter, Hajrullahu kicked a 49-yard field goal to tie the game 14-14 entering the final frame.