Grey Cup 100 Train Tour: A Canadian Icon Travels The Country In The Most Canadian Way 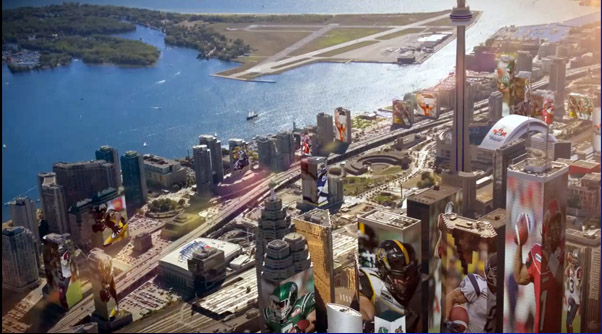 Grey Cup 100 Train Tour: A Canadian Icon Travels The Country In The Most Canadian Way

TORONTO — The Canadian icon that has inspired so many pilgrimages is embarking on its own: the Grey Cup 100 Tour presented by RONA will take Canada by train this Fall.

“The Grey Cup really belongs to every Canadian, so our goal for this special year of the 100th Grey Cup game is to bring it to as many cities, towns and Canadians as we can,” said Mark Cohon, Commissioner of the Canadian Football League.

“And thanks to our presenting partner RONA, we are doing it in a way that will make Canadians proud, and in the most Canadian way possible: by train.”

The Grey Cup 100 Tour presented by RONA will make 100 stops across Canada, including all eight CFL cities — Vancouver, Calgary, Edmonton, Regina, Winnipeg, Hamilton, Toronto and Montreal — as well as Ottawa, the national capital and site of so much Canadian football history, Quebec City, Moncton and Halifax.

Dates and times, and a full list of stops, will be released in the weeks ahead and can be found on www.greycuptour.ca.

“We will take the Cup to places it has called home, and places it has never been before, and each time it arrives, we will host a celebration worthy of its stature and full of fun,” Cohon said.

The Grey Cup will arrive in several cities aboard a specially retrofitted train that includes a car showcasing the trophy, a special museum car that captures its long and storied history, and a team car that celebrates the special place today’s CFL teams have in their communities and the hearts of their fans across the country.

The train will be surrounded by fun activities for families as well as pomp and ceremony.

Fans can have their photo taken with the Grey Cup and immediately share their pride via social media with family, friends and fellow fans.

The trophy will be transported by road to other cities and towns not directly accessible by rail, visiting schools, hospitals and community centres.

Cohon thanked the Government of Canada for its support — announced in last year’s federal budget — for the 100th Grey Cup celebrations including the train tour.

“It revolves around a great Canadian sport, but the Grey Cup has evolved into so much more,” said the Honourable James Moore, Minister of Canadian Heritage and Official Languages.

“It’s a source of pride and unity, part of our history and heritage, and something that plays an important role each year in the cultural life of Canadians. Sharing the celebration of the 100th Grey Cup by bringing the trophy and its lore to Canadians is a worthy and exciting endeavour.”

RONA, a proud partner of the CFL, will mark this Canadian milestone with a special 100th Grey Cup legacy project by using its RONA Home-Field Advantage Program.

“2012 marks a special year of celebrations for us, we are thrilled to partner with the CFL to present the 100th Grey Cup Tour’’, said Karim Salabi, Executive Vice President, Marketing at RONA. ‘’Bringing our expertise to the communities where we live and investing $ 240,000 through the RONA Home-Field Advantage Program makes us extremely proud’’ he added. Mr Salabi mentioned that RONA will unveil the football fields to be refurbished with donated materials and volunteers’ time during the Tour.

Premier partners TELUS, TSN, RDS and Cisco have also been intimately involved in the support and planning of the tour which launches from Vancouver September 7th, spans 72 days, and will conclude in November when the Grey Cup arrives in Toronto for the 100th Grey Cup Festival followed, of course, by the 100th Grey Cup game on November 25th.

GMR, a global full-service and award-winning engagement marketing company with Canadian offices in Toronto and Vancouver, is the lead agency and producer of the Grey Cup 100 Tour.

“Our entire agency is rallying around the CFL and GMR’s team of experts to help create this historic Canadian celebration.  We are proud to be the lead agency producing one of Canada’s largest, most complex tours ever,” says Sean Cunningham, GMR’s Director of Partnerships and project lead.

Donated by then Governor General Earl Grey in 1909, the Grey Cup has, like Canada, emerged from two World Wars, a Depression, and countless challenges and triumphs, to be stronger than ever.

“We are proud that the Grey Cup has for decades been the trophy awarded to the champions of our league,” Cohon said.

“We are prouder still that it has become something even bigger than our game. It is a symbol of Canadian unity, of our ability to compete and come together at the same time. The Grey Cup is special. It’s ours. And it’s time to celebrate it — and Canada.”

About the Canadian Football League

The Canadian Football League is our league. The Grey Cup is our national championship and Canada’s largest annual single sporting event. We are proudly preparing for the 100th Grey Cup in 2012. The celebration will span the country and culminate in a tremendous festival and game in Toronto next November. We invite all Canadians to be a part of it.