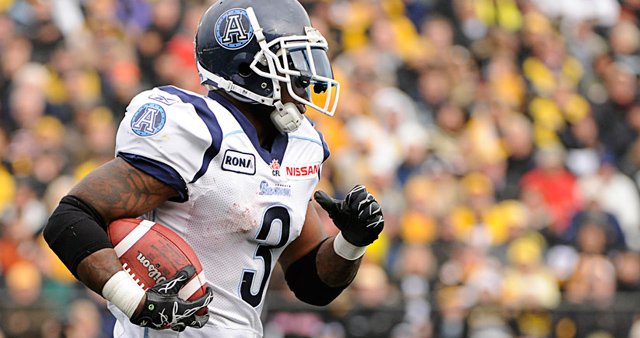 MISSISSAUGA — The Toronto Argonauts Football Club is pleased to announce that it has extended the contract of its star running back, Cory Boyd, through the 2013 season.

Commented Argonauts General Manager and Head Coach Jim Barker, “Physical. Relentless. Dynamic.  Those are the words I would use to describe Cory Boyd’s style of play.  He is the kind of player other teams do not want to play against and the kind of player you want on your side.  We are very excited to extend Cory’s current contract through 2013.  He proved to be a vital part of our offence and locking up key players is a core part of our philosophy.  With one year under his belt, and the understanding of what is needed to train and condition for this league, we look forward to seeing the even greater things Cory is capable of – both on and off the field – in the seasons to come.”

In 2010, RB Cory Boyd took the Canadian Football League by storm in his rookie season.  The New Jersey native was named a CFL All-Star, a CFLPA All-Star, an East Division All-Star and was named the Argos’ Most Outstanding Player. Boyd was the first Argos running back since Michael Jenkins in 2001 to be named a CFL All-Star. He finished the season as the league’s second-leading rusher with 1,359 yards, scored eight (8) touchdowns (six rushing & two receiving) and was the club’s fifth-leading receiver (363 yards). Boyd led the CFL in yards from scrimmage with 1,722 and broke or matched several club records.