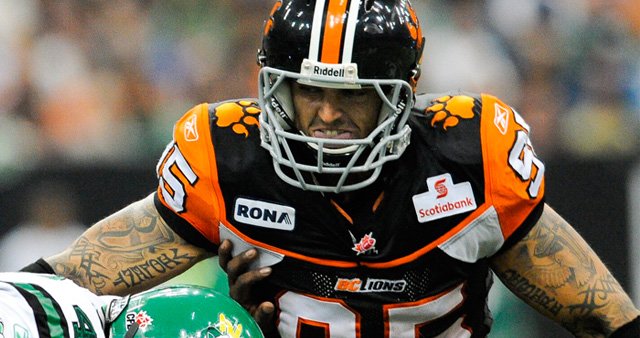 MISSISSAUGA – The Toronto Argonauts Football Club is pleased to announce that reigning CFL Most Outstanding Canadian DE Ricky Foley has signed a contract with the club through the 2012 season. Foley, who makes his off-season home on his family farm in Courtice, Ontario, an hour east of Toronto, comes home to play football for the first time since university.

Commented Argonauts Head Coach Jim Barker, “Ricky established himself as a premiere pass rusher in this league as evidenced by his Outstanding Canadian Player Award last year.  He is a young man from the Toronto-area that was a free agent.  We went through our due diligence, made one offer and one offer only, which never changed.  Ricky went through his process to decide what was right for him and his family and he chose to be a Toronto Argonaut.  We are thrilled to have him as a member of our team.”

A product of York University, Foley was named the CFL’s Most Outstanding Canadian in 2009. Last season, he experienced a breakout year in his first full campaign as a starter making 12 sacks (tied for the CFL lead) and 51 defensive tackles. Foley was originally drafted by the Lions with the fourth overall pick in the 2006 CFL Canadian Draft. He went on to play four seasons in B.C. where he was crowned a Grey Cup champion in his rookie year and has never missed the CFL playoffs.

Foley commented on his homecoming, “The last two weeks have truly been a rollercoaster ride for me and I’m glad to move forward.  At the end of the day, family comes first for me.  You never know when you’re going to get the opportunity to play at home and I had to take advantage of the opportunity when it presented itself. I’m comfortable with a lot of the guys on the team and the situation in Toronto. I can’t wait until Sunday to focus on what I do best which is play football.  I am looking ahead and looking forward to being a part of the Toronto Argonauts, the team I grew up watching.”

A Second-Team CIS All-Canadian as a York Lions senior, Foley twice earned All-OUA honours. He first played the sport of football in his second year at York where he was teammates with current Argos star Canadian, RB/SB Andre Durie. Foley began high school at Courtice H.S. before transferring to Paul Dwyer H.S. in Oshawa, Ontario.

He was granted CFL free agency in February of this year and signed with the NFL’s Seattle Seahawks. He was waived by Seattle on August 30 and claimed by the New York Jets before being released and signing in Toronto.