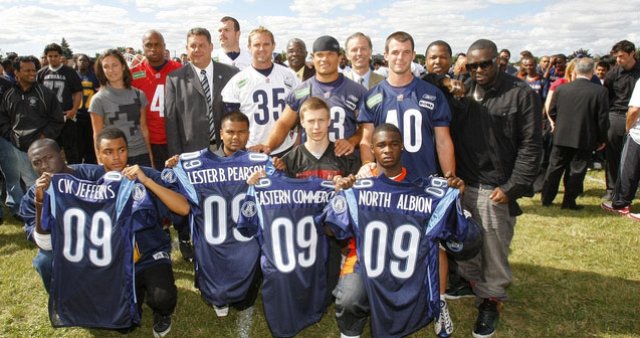 North York, ON – At a special team practice held at CW Jefferys Collegiate, the Toronto Argonauts and The Argos Foundation announced that they have partnered with the Toronto District School Board (TDSB) and the Toronto Foundation for Student Success on a new, multi-faceted program entitled Level The Playing Field, sponsored by Tim Hortons, which, in its inaugural year, will see football teams return to four Toronto-area high schools.  Lester B. Pearson, Eastern Commerce, CW Jefferys and North Albion Collegiate will each field a football team this fall, after decades of not having teams.

THESE PLAYERS ARE OUR FUTURE

“These high school football players represent the future. The goal of the Level the Playing Field program is to provide funding to … establish football teams at schools that don’t have them, and improve the quality and safety of the sport at schools which do have teams.” – Bob Nicholson, Toronto Argonauts President & CEO

Chris Spence, Director of Education, TDSB, commented, “As a former football player, I can truly say from personal experience that nothing builds esteem, a sense of accomplishment and fosters teamwork like being a member of a football squad.  We are thrilled to partner with the Toronto Argonauts, The Argos Foundation and the Toronto Foundation for Student Success to bring football teams back to these schools.  Our students benefit – they become active and engaged in their after-school hours, while achieving positive self-development!  Everyone wins!”

Bob Nicholson, President and CEO, Toronto Argonauts, remarked, “These high school football players represent the future.  Many may go on to play in the CFL or at the university level.  Many may meet new friends, while developing their athletic ability and contributing in a positive way to their school and community.  The goal of the Level the Playing Field program is to provide funding to schools in the Toronto District School Board to establish football teams at schools that don’t have them, and improve the quality and safety of the sport at schools which do have teams.  A deeper goal is to enhance the school culture and spirit and develop football as an after school activity that can help curb youth violence in the community surrounding each school.”

The TDSB chose the four schools to participate in Level The Playing Field.  The Argos Foundation has donated $10,000 to each of the four schools to help get the football teams launched.  Additionally, the Toronto Argonauts announced that they would continue their subsidy of athletic therapists at all TDSB football games for a second year, thereby ensuring the health and safety of all high school football players.  Tim Hortons has come on-board as the presenting sponsor of Level The Playing Field. Their three-year commitment should see the program continue to grow through the 2011 school year.

“We are thrilled to be sponsoring the Level the Playing Field program,” said Kim MacCallum, Tim Hortons Store Owner. “As an active member of the community in Toronto, we want to do our part to support team sports in our local school system.  We believe that team sports contribute positively to the development of children and youth. We are committed to giving back to the communities where we live, work and play.”

PLAYER AMBASSADORS – Each school will have an Argos player designated as their own ambassador.  This player will adopt that team as his own. The ambassador will visit practices and a game, host a classroom discussion about community and work with the team on a community activity.

CHEERLEADER AMBASSADORS – The schools will have a member of the Argos Cheerleaders assist them in building their own cheer teams.

PEP RALLY – The Toronto Argonauts will host a pep rally at each of the four schools to cultivate school spirit in support of the teams.  Each rally will include the presence of a player, cheerleaders and an Argonauts emcee.

COACHES CLINIC – The new teams will be able to learn coaching tips and techniques from Argonauts General Manager/Vice President, Football Operations Adam Rita and other coaches and football staff members at Argonauts practices and a game.

OFFICIAL ARGOS GAME DAYS – Each football team will be honoured in front of the crowd at Rogers Centre before an Argos home game. Specific days are designated for each team so that their friends and families can go to the game. The teams will be able to sell tickets to the games in order to raise additional funds for their football team and after-school programs.